Here’s one of my favorite new bike setups. Skinny multi-speed mountain bike cranks. XX1 cranks with two chainrings and a guide ring. This setup is  going on my Firefly 29er Hardtail and I just did it on my Anthem 27.5. I’ll have just 7mm of clearance from the fat Ti chainstays. Sick! Enough, I hope. 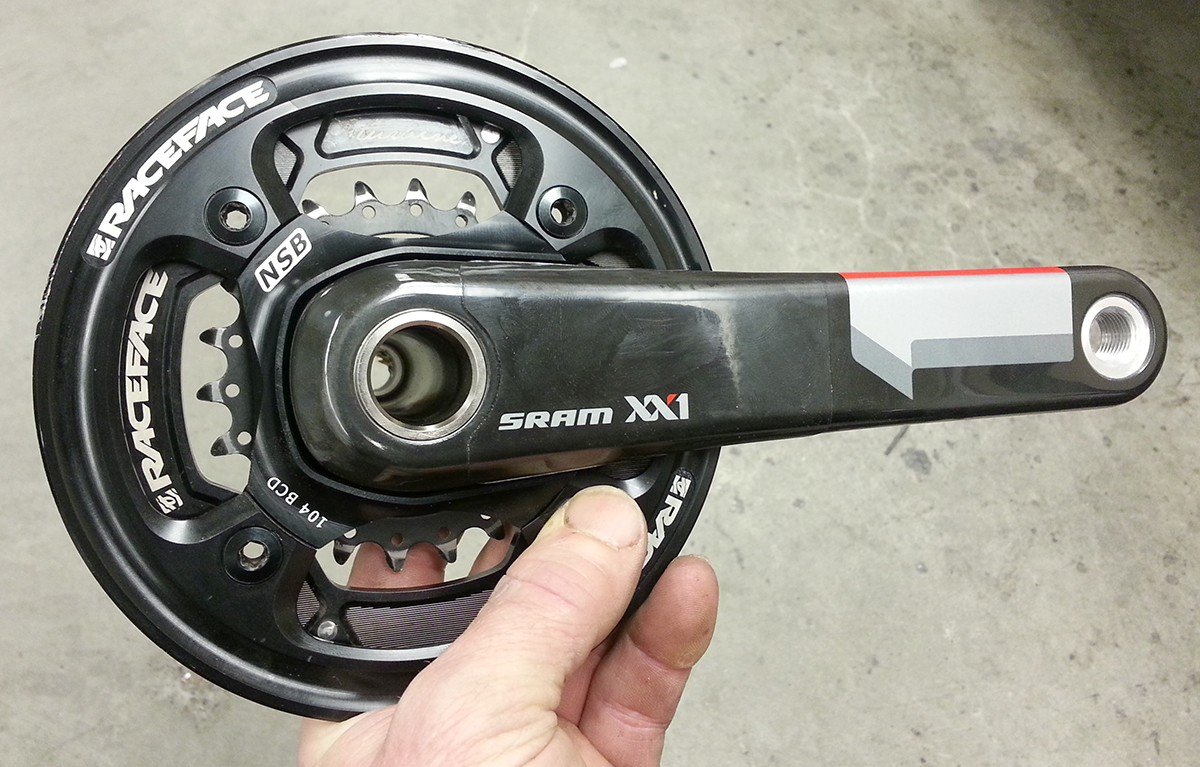 I’ve been a Shimano guy for years. I won’t use anybody else’s pedals, brakes, or shifting parts. They are just the best you can use. Period. Another part they make that I believe is better than anybody else’s is their cranks…but I don’t use them anymore. I use SRAM cranks now. Why? Simple, removable spiders and that they have several different widths available. If Shimano were doing things like this I would be using the Shimano version. Full stop.

I prefer having lots of these options because I do lots of bike builds where my particular goals may not be what the product manager had in mind. This goes back a ways, and also recently (1,2). I want what I want. I’m known for that.

The SRAM XX1 cranks are available in a couple of widths: Q156, Q166. Other SRAM products for triple rings have Q176 widths. That’s pretty cool. Given that most road cranks are about Q146, I can get very close to duplicating that situation. This is of course a significant change. Essentially 10% narrower tread.

I’m actually not worried about having fancy carbon fibre cranks or that they be the lightest I can get. I’d use aluminum if the option was available. Actually, for mountain bike I prefer it as I grind against a lot of rock. Carbon doesn’t like that.

You don’t see this done too often, but by changing the spider on the XX1 or X01 cranks, you can run them on a double chainring setup, which I prefer. I’m actually the only person doing this that I know of. I guess I’m one of the few that really likes having multiple chainrings. Whatever. I’m right, they’re wrong (for now). There really is enough room as long as you are careful setting up the front derailure. You don’t want the derailleur getting smashed by the cranks.

I use the NSB 2X spider for this type of setup because of the thin 104mm tab. Space is precious here and even with the thin tabs I still need to file the keeper ring to get around the crank arm. I love the Gamut spider when I otherwise have the space because the tab is a bit thicker (bomber). When looking into after market spiders, always order X0 rather than X9 spiders. The X0 can be used on any crank while the X9 can only be used on X9. Simple enough.

Always Loctite (#242 or 243, never red) chainring bolts in place. Serious problems often result when (especially an inner bolt) comes loose and always on big rides. I’ve learned to always install chainrings as perfect as possible the first time as it may be years without checking that a problem occurs.

It’s so nice to pedal on a bike with this setup. It’s like being on a road bike. So much nicer than wide ass cranks that just feel funny. Look up fitting information on Q-factor and tread for fitting bikes. You don’t want to go too narrow, which is next to impossible to do on a dirt bike, but going too wide is certainly common and not good for your knees or power.

A funny thing about this, or more appropriately, obvious thing, is that narrowing the cranks these 20mm resulted in me needing to raise my saddle height 5mm. Simple concept when thinking in terms of triangles, but not immediately considered.