This was supposed to be a nice little post about a setup tweak to Windy’s Stumpjumper and a different look at front end setup. Instead, we are also going to look at what makes a terrible commercial handlebar and what makes one good.

When setting up Windy’s new bike, we were trying to push the limit of what could be done with a commercial bike and a modern setup for a particular rider. This meant that some nudging and careful part selection was needed. Knowing the handlebars and stem that will be used for an assembly prior to purchasing it makes a massive difference in the end product.

The critical part of that bike was, again, the cockpit setup, stem, bars and spacers. At the time, the SQ Labs 30x Low 12° handlebar was chosen to leverage some it’s increased sweep for increased comfort and fitment. The 12 degree sweep would bring the hand grip back 62mm from the stem. That’s a lot compared to other commodity bars that are in the 45-50mm range.

These are very high quality handlebars. They also have a very good geometry that allow for a variety of rider setup. the 240mm grip length allows the bars to be cut down and controls placed as we please. The only problem is sparse distribution in the United States (and poor documentation on their website). 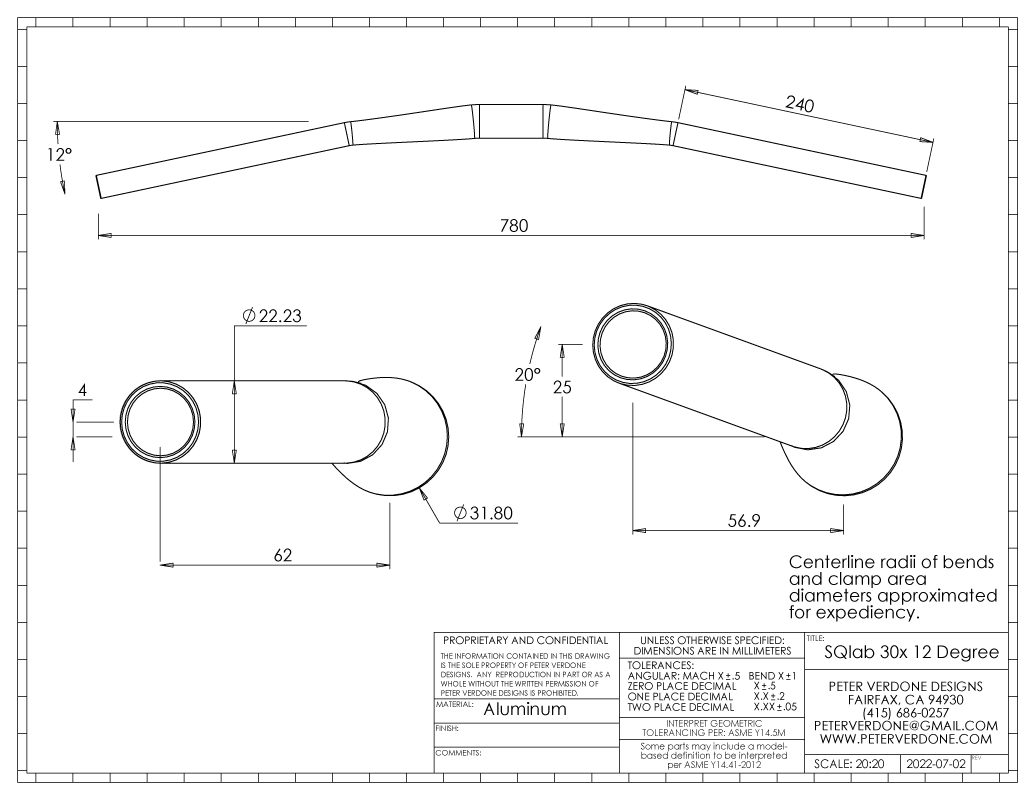 Using this handlebar, we got a setup as follows:

Windy isn’t good at giving me feedback. Much of my work setting her bike up has to be cerebralized in my mind to anticipate what will help her. She’s just not going to come out and tell me what’s going wrong in a way that would help a tuner. This is something a lot of tuners need to figure out how to do. Really, it is the art.

The bike had ended up with a pretty nice fit for Windy upon the bike. Looking at here torso and arms, her fit looks familiar to what I would call a nice energetic fit. Remember though, her saddle is just 150mm (77.8°) behind the cranks. Far forward compared to bikes of the past.

I’ve been thinking a bit about this as what I described as the ‘cab forward’ setup. This could be considered an extreme case of forward geometry where the saddle and handlebars are essentially moved forward together from a classic upper body position, keeping a rider stretched out and (maybe) ending up a bit too far over the front. You can see that the grips are at a 55.2° angle from the cranks. This can lead to some issues going down hill and a lot of load put on the arms in general.

Windy does have preferences. She likes a more upright riding position and comfy hand angles. We call this the ‘fred’ position. The 12 degree sweep is an improvement from what she would have with 9 degree. I think that she could enjoy more. This would be a more relaxed position. More sweep would also bring her grips more rearward, reducing the cab forward effect.

As a note before, I could have set the bike up with a Syntace 44mm FlatForce stem instead of the 55mm to move the grips a little more to the rear. I’ve got a lot of experience with these stems and with carbon frames and the clearances are often far too tight in every condition. I’ve found that the 44mm is for emergencies, not a long term plan.

So, I had a handlebar in mind. The new Salsa Bend Deluxe 17 degree. I had been waiting for it to become available and got one once it had. I deeply regret this loss of tuning time and money.

While the images on the website would give an impression of the shape of the bar, the dimensions provided are next to useless. “5° upsweep” is utterly stupid. It’s just not what you’d think.

Getting the bars in hand, it was clear the bars were not what I had thought they would be. Certainly not what the images on their website would have me believe. They push forward hard before sweeping back. An archaic type of bar. I was thinking that these would be more modern, like the 30x bars. Instead of reaching back farther than the SQ 30x 12°s, they are 15.2mm shorter. 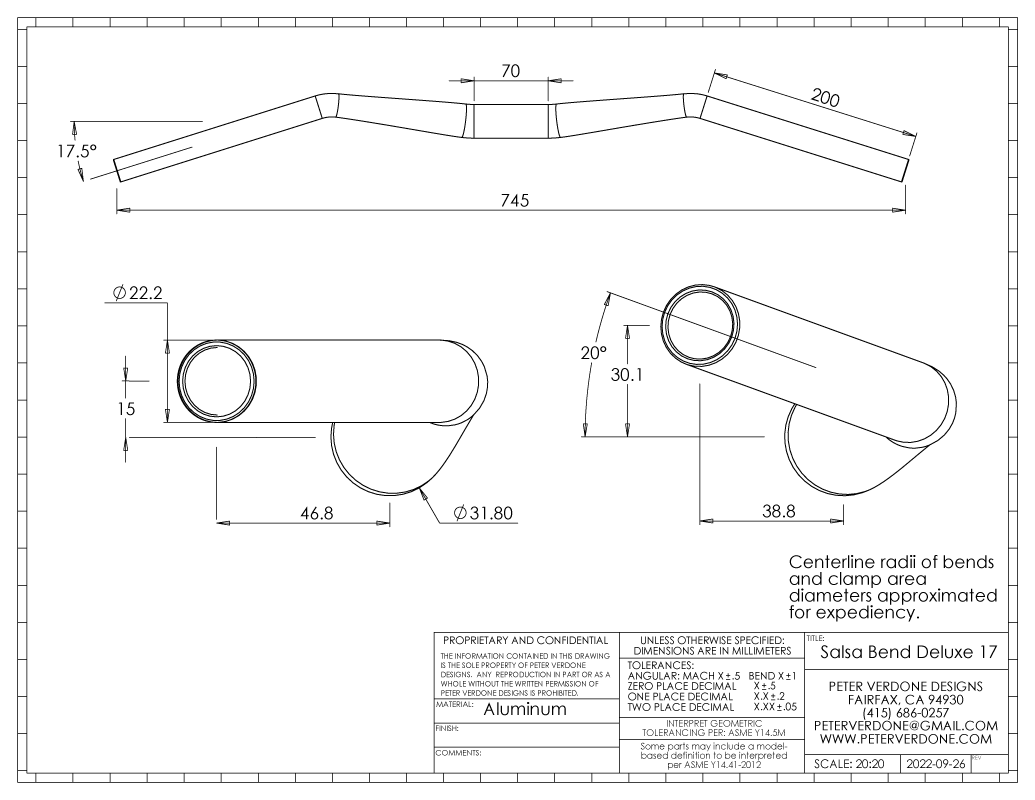 There’s just no excuse for this. A bar that imagines that stem length is fixed is just terrible. What real value is here?

So, those bars go into the pile of junk parts. Do not buy these handlebars!

I had to then get another set of SQ Labs 30x but the 16°s and wait another week for them to arrive. These had to come from Europe. I had put this off as I figured that the Salsa 17s would be more than the SQ 30s, and that Salsa was a domestic brand. These SQ bars are different though, they are proper modern handlebars. 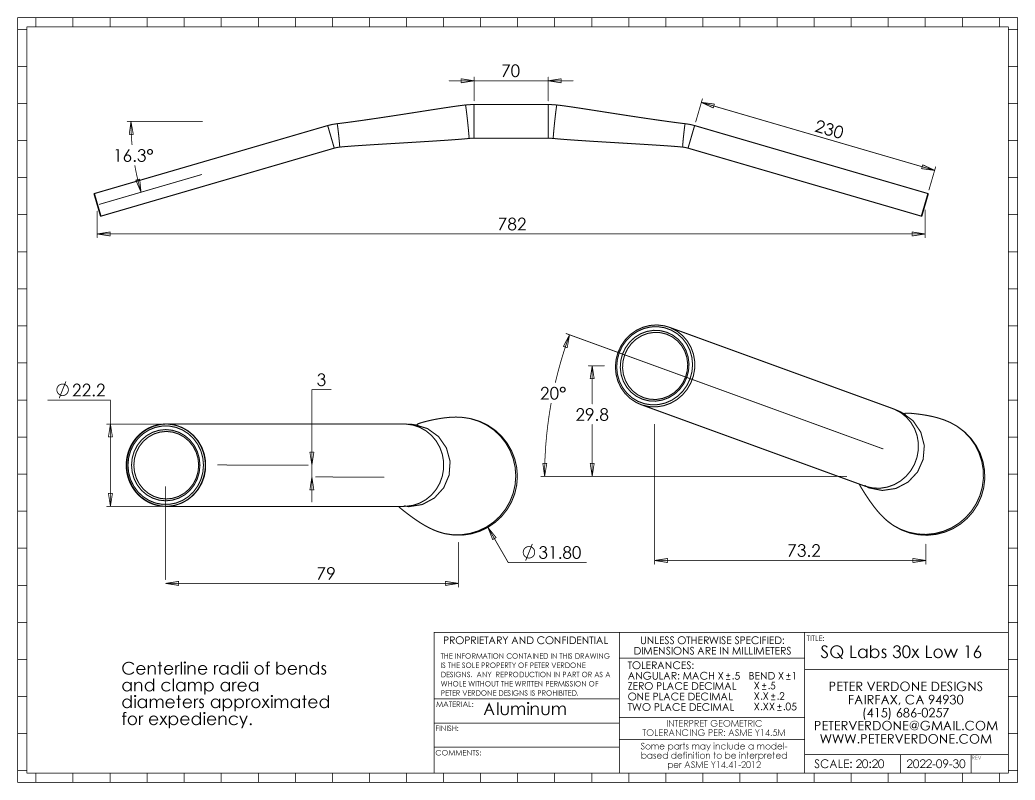 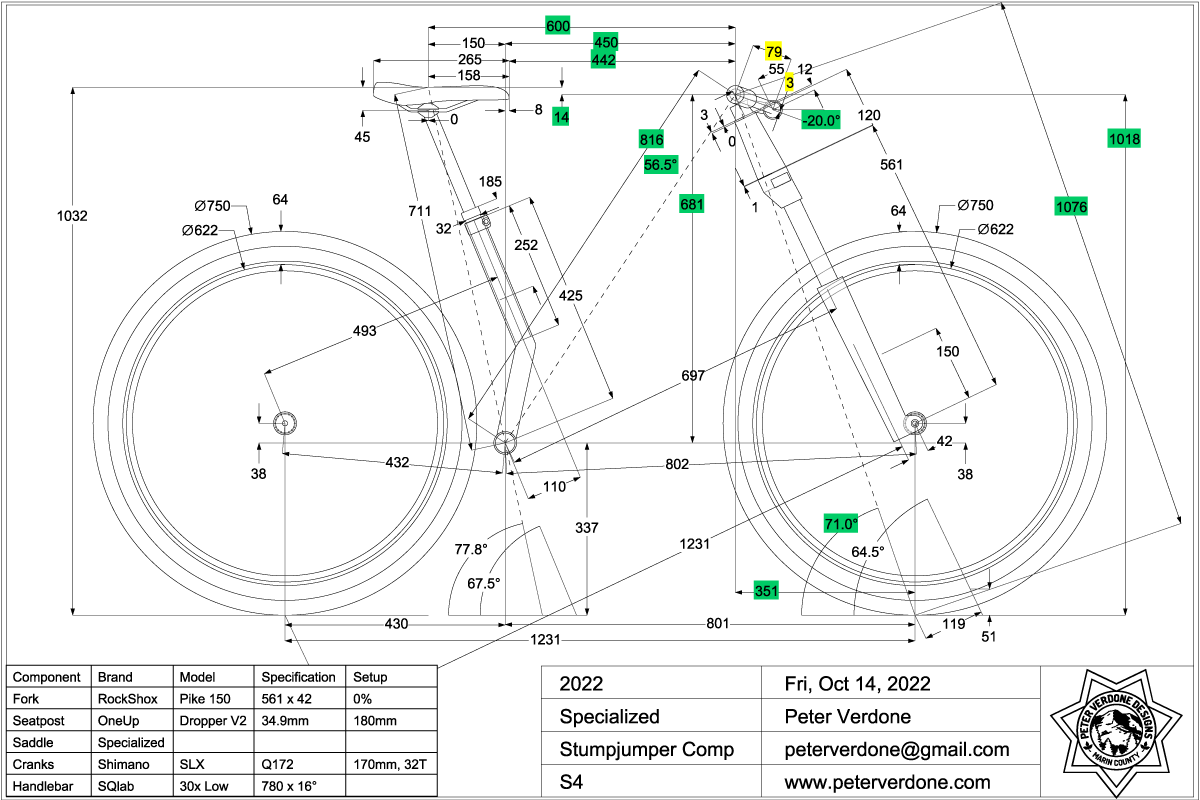 When cutting these new bars to size, I increased them a bit from the 750mm that we previously had for the 12° bars. Bars need to get wider with increased sweep. I cut them to 760mm.

These new bars have also added a huge amount of flexibility to the setup. I can move the grips forward with a 66mm stem to be just 10mm behind the initial setup or 77mm stem for the same. I will also gain some room to use spacers to adjust height, allowing lower grips. This is a much better situation over time.