***THIS ISSUE HAS BEEN RESOLVED – SEE THIS POST*** I like my Santa Cruz Butcher. It’s a fun, solid, no-frills trailbike. I got it for that reason. I didn’t want to mess with it and I wanted solid.A creak had developed in the main pivot. I hate that. I hadn’t taken it apart when I … Read more Santa Cruz Butcher Pivot Pin Issues

I just made a few of these little dandys. They are shims that are placed within the split bolt of the Ruger 77/22 to adjust the chamber headspace. A 22LR firearm should be headspaced to the absolute minimum to get the most accuracy possible from the gun. Many guns will come with far too much … Read more Headspace Shims!

So, I ordered up a nice little 22lr rifle to reduce my shooting costs and light enough to practice some off bench shooting. It’s a Ruger 77/22 All-Weather. It’s a gun slightly more expensive than it’s competition, but it’s got a great reputation for use, it’s made in America, and it looks awesome. Plus, it’s super light … Read more Power pin!

Today I stumbled on the proverbial pot of gold for bike folks, an early Wicked Fat Chance at a local pawn shop.  The bike apears to be a late 80’s or very early 90’s frame. It’s still got the pressed in BB bearings that were phased out in 1991. Honestly, I don’t need it but … Read more Ever dreamed of finding a Wicked Fat Chance in a pawn shop?!?!

Mary was re-gearing her Nomad this morning. Putting a 26 tooth ring up front to give here knees a break climbing on the, now heavy, bike. We were checking the ring spacing when we found something off. I really hope that this is the only one that slipped through QC. #Y1LR26000, Chainring 26T-AH, FC-M980 It’s as if … Read more Shimano XTR. Chainring QC Issue?

I made a neat little spider chuck. It’s for machining the bolt of the 308AR for accuracy. A spider chuck allows me to locate the bolt exactly according to the several features that I decide are important regardless of the shape of the part. Since these parts are forged and then machined in very elaborate … Read more Itsy bitsy spider chuck

I wasn’t happy shooting my Ruger LCR +P for a few reasons. Shooting outdoors was ok, but indoors wasn’t so hot. Josh Orlando and I were shooting at Bullseye and we both agreed that a change should be made. It was very difficult to sight in with the stock sight. I got parts ordered while doing … Read more New sight for the LCR!

The dedicated marksman rifle (DMR) – A rifle designed to fill the gap between an assault and sniper rifle. A battle rifle that can maintain accurate rapid fire at ranges up to 600 yards. I decided that it was time to invest in a nice rifle. Something that I could shoot long range (up to … Read more PVD-DMR308

Early this morning, local MTB talent Ben Cruz and one of his bro’s were in the woods in Novato. They were getting a hit lined up involving a stump or tree of some sort. In the stump, they discovered a duffel bag with a few Japanese war rifles in it. Arisakas. This is a boy dream. … Read more Arisaka! 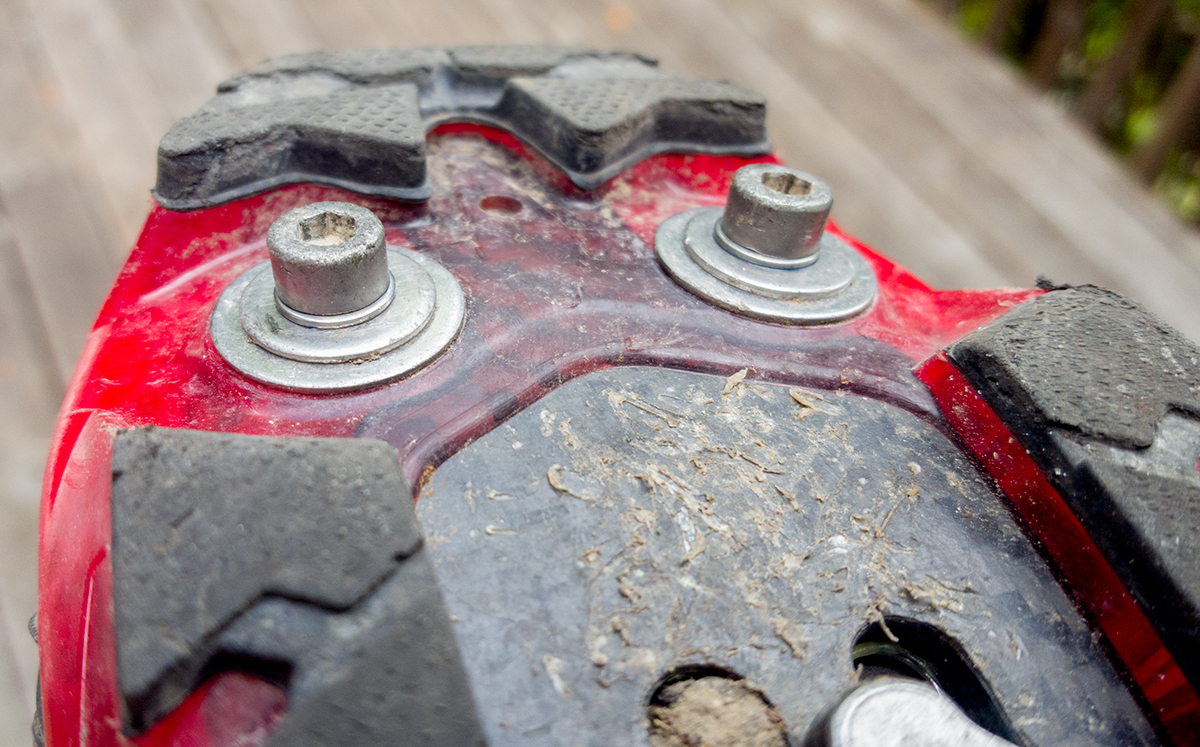 ***Update 2017-02-23*** Time has proven that the spike configuration seen below is one of the best ways of accomplishing the goal. The importance of the fender washer stack can’t be emphasized enough. It spreads the load of the spike and reduces failure. Very long spikes are hard to justify. Most often, the result in a … Read more PVD Toe Spikes!

This is a pretty special bike. A juvenile DH race bike for my friend Bryan Harrell’s son Jake. Jake has been racing ABA BMX (ranked 4th district CA04) for the past two seasons and is absolutely killing it. As mountain bikers and living in the best place you can for riding trail, it is only natural … Read more PVD Micro-DH – PodRacerOne

This is a quick little thing. Most folks have seen this before but it’s nice to remember. http://en.wikipedia.org/wiki/RGB_color_model http://en.wikipedia.org/wiki/CMYK_color_model A fun project to get working correctly in Ai. Give it a try. Obviously, I had to convert the CMYK colors to RGB for this demonstration to be seen on a light emitting source.

Since getting my wrist completely shattered at RFT and not being able to do much of anything, I dropped my motorcycle off to BRG Racing to have some work finished that I had started on my motorcycle. I had the motor half apart already but there was no way that I’d be able to continue the job … Read more The Gixxer is back!

I’m getting a 29er type bike built for me this winter. All I needed to do was design it. I’m looking for it to be a nice tight fire roadie/crosser that can still ride real singletrack quickly with tires maxing out at 1.9″. Special attention is going to be put into getting the largest chainrings possible … Read more A current print for an upcoming bike.

I absolutely love trigonometry. It’s how we come to understand circles and curves. I work at the Physics & Astronomy Department at San Francisco State University. Every semester a few students will express their unease, confusion, and problem doing trigonometric work. Over the years, it’s been shown that, all of them, have never been given … Read more Trigonometry

A long, long time ago (1998?) I designed the disc brake dropouts for Independent Fabrications. I knew the whole crew there as we had all worked at Fat City Cycles together. The reason for the design was simple, I needed a new bike and I use Shimano parts. That was the moment that Shimano had … Read more Very fancy dropouts for Firefly Bicycles

Things went pretty wrong at the Tara Llanes Classic. I’m bummed. Not just because of getting injured but because I really thought I had a shot at 2nd place in Cat 1, 40+. Grrr. I even had a cool bike for MegaDH. I got kicked off a big jump really bad on my warm up … Read more Things going wrong, the bad way.

This weekend is the Tara LLanes Classic. http://www.tarallanesclassic.org/. It’s what is called a Mega DH. Mega DH is essentially Super D’s wicked brother. A very long DH race with no emphasis on real climbing but a bunch of pedalling at high speeds could be involved. The key is that the course will involve true downhill trails … Read more MEGA DH !

Jake Harrell is the son of my friend and business partner, Bryan. Fairfax Cyclery!!! Jake and Bryan have been racing a ton of BMX lately and Jake is proving to be a seriously fast kid. He can’t wait to get out with dad and the bros for the downhill rides. Problem: There is really nothing … Read more PodracerOne – Big Evil, Small Package

Simple leverage. Didn’t anybody else do the math? BB30/PF30 has proven to be a complete mechanical failure. It was obvious from the outset and I had made good arguments against it when it was first being rolled out. The Shimano system is clearly superior but for some reason cyclists thing that everything has to be … Read more BB86 is 30% stronger than BB30

The proper setup of Downhill and long travel suspension bikes often requires the frequent removal of the shock as well as having the system in a topped out AND bottomed out state. These little dummy shocks allow the rear end to be easily fastend in place to adjust things like chain length, cable routing, chain … Read more PVD Dummy Shocks

Ashland Super D, Cat 1 40-55 Men, 42:26, 14th. Super fun race. A poor showing for me. Ran with full fixed high post. I was a bit out of shape for the climbing and could have saved some time with a dropper post. Can’t wait until next year. I would expect at least a 39 … Read more Ashland 12 Mile

Cheap stems are rad. They do just fine holding the handlebar in place and come in many sizes. Most are even lightweight. What’s the problem? Tolerances. Most cheap stems are cast or use cast parts in a weldement. These parts have deviations that cause a problem. The issue is that the bottom side of the … Read more Making a dollar out of fifteen cents.

I read an artical online about a guy that made a few eccentric reducers for shocks to use for adjusting ride height on bicycles. It was a great idea although his execution was rather poor. I instantly decided to add that option to my PVD Reducers. Pretty cool. 1mm offset at both ends of the shock … Read more PVD Eccentric Shock Reducers

Mary Pralinsky wanted a beater bike to take to the jumps and to the pump tracks. She wanted something cheap and unbreakable. Nothing can touch a Specialized P3 when it comes to that. The bike is heavy and indestructable. She found someone selling a used one with 90% of the parts for $200 and picked … Read more Specialized P3, Best shit bike ever!

So…. My friend Matt gave me a call. He had purchased a basket case VW Super Beetle project car. The car had had a lot of work done on it but wasn’t completed and it needed an engine. Matt had a line on a Porsche 914 engine that would drop right in. He purchased both … Read more Super Beetle / GTI Strut Modification

A Super D bike is a very special kind of bike. 90% DH Trail with 10% Climbing. Super high speeds on smooth to aggressive surfaces. You need a light bike but something that works right when treated rough. 160mm frames tend to work especially well in this situation if set up well for pedaling and … Read more Super D(set) Suicide

Named for NASA Project Gemini, since it’s the bike after Mercury. This is the first of a pair of bikes, one mountain and one road. They will reflect a snapshot in both disciplines of my bike design techinque. They will share several design cues. They will proabably be painted the same color. Since these will … Read more Gemini (Alpha) – 150mm Hardtail Trailbike